After a busy first half of January, calm and normalcy has been restored in California politics, and the Tweets of our California Influencers Index reflect that. This installment covers the Twitter activity of more than 300 California political insiders over a ten-day window from Jan 24-Feb. 2. The Tweets have been digested and analyzed using software from San Francisco-based Zignal Labs.

Here’s what California political hacks, flacks and others were buzzing about from Jan 24- Feb. 2.

In all, there were more than 28,000 Twitter mentions of our illustrious panel during the 10-day window — an average of more than 100 per hour. 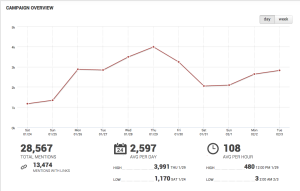 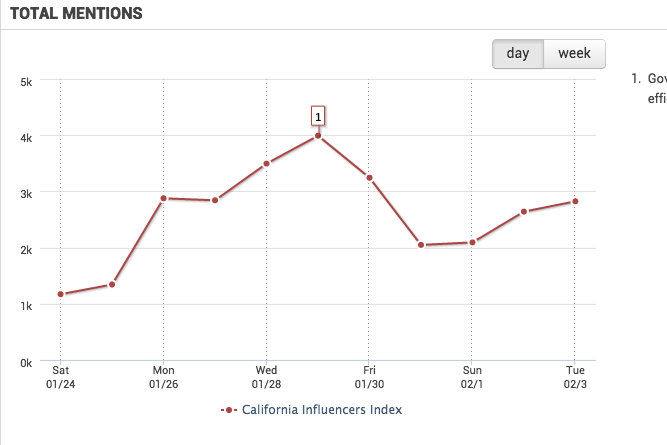 While the Super Bowl did not move the needle much among our political insiders, a Super Bowl-related Tweet from a member of Congress second-guessing the Seahawks’ final play call was the most popular of the last couple of weeks. Other popular topics included Brown’s energy announement from White House adviser John Podesta, the New Yorker on the global wealth gap, Brown on the drought, and some urban planning suggestions courtesy of San Francisco’s Lisa McIntire.

Here’s the most popular tweets from the second half of January either from, or mentioning, Twitter handles from the Index.

The Chronicle’s Carla Marinucci wins the most prolific Tweeter award for the period, with 175 Tweets during the 10-day window. LAT’s  Chris Megerian was next with 149 mentions followed closely by John Myers with 144 — all average more than 14 Tweets per day.

As far as what was being circulated, items from the Sacramento Bee were mentioned among our elite Twitterati 1,030 times, followed by the Los Angeles Times with 788 shares and the San Francisco Chronicle with 314 shares.

In celebrity political news, MC Hammer makes his first appearance on our index, caught in our social media crosshairs when he mentioned some pro-immigrant comments made by Los Angeles Mayor Eric Garcetti. Other celebs weighing in included Morgan Fairchild, who Tweeted stories from the New York Times and Los Angeles Times on GOP tax hikers, and Oakland Raiders defensive lineman Justin Tuck, who Tweeted about his appearance with Lt. Gov. Gavin Newsom at an event on behalf of the Sonima Foundation. 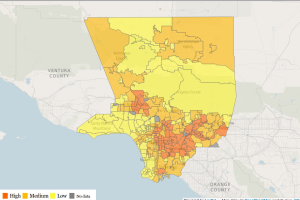 Getting to know California requires trying to understand Los Angeles. Since 2009, the Mapping Los Angeles Project has...
COPYRIGHT 2015 GRIZZLY BEAR PROJECT
Back to top