Rising university tuition costs have been a hot topic in California, where Gov. Jerry Brown and state lawmakers have tangled with UC executives over budgets, spending and state investment levels in higher education.

Long story short: The University of California says the state needs to increase its investment in its public universities to stave off tuition hikes, while the state wants UC to be more creative and willing when it comes to penny-pinching

This political tension is rooted in the fundamental question recently asked by the New York Times: Why does college cost so much?

California is typical of other states. Since 1993, tuition has gone from about $3,400 to more than $12,000 for in-state undergraduates at the University of California and about $1,440 to $4,800 at the California State University System, according to data from the universities.

Part of the reason: Universities are serving more students than ever.

Data shows UC administration is up by more than 300% while CSU’s is down about 33% over the same period.
Tweet This

State funding has not kept pace with that enrollment growth. This chart from a 2011 study from the Public Policy Institute of California shows the state’s funding of CSU and UC has declined sharply over the last several decades 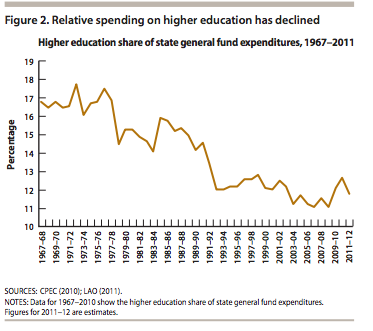 But, the Times article pointed to another potential culprit – the rise of the university administrator. “A major factor driving increasing costs is the constant expansion of university administration. According to the Department of Education data, administrative positions at colleges and universities grew by 60 percent between 1993 and 2009, which Bloomberg reported was 10 times the rate of growth of tenured faculty positions.”

So we decided to look at the employment numbers for administrators at the University of California and California State University systems. Here’s what we found:

At the nine major undergraduate UC campuses (excluding UC Merced, Hastings and UC San Francisco) administrative positions have more than tripled between 1993-2013, according to the National Center for Education Statistics. Below is a table showing the administrative growth at the UC system, broken down by campus. 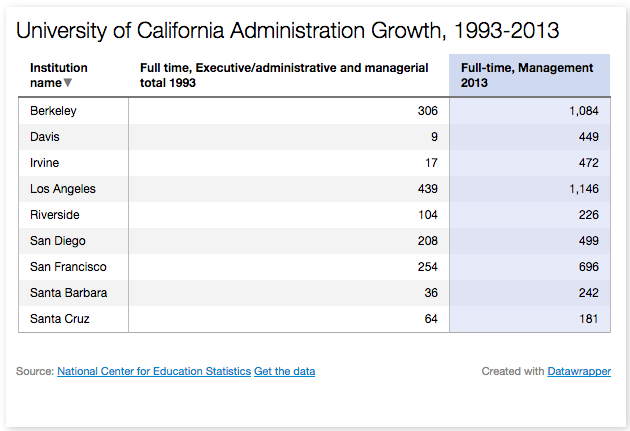 Here’s the table visualized in a bar chart, color coded by campus 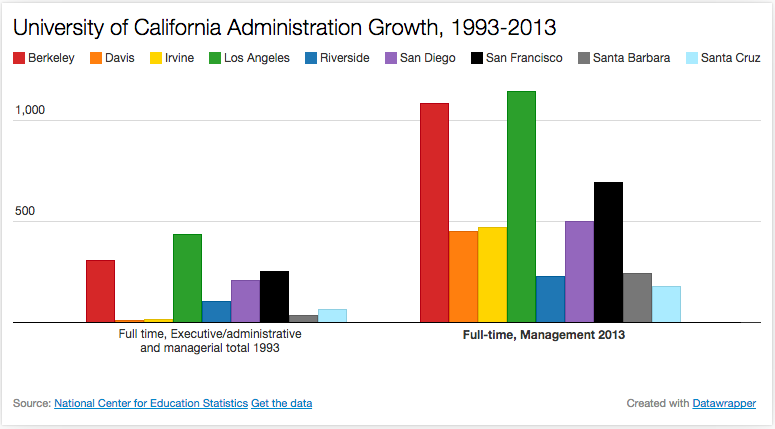 According to the federal reporting standards, these are high-ranking administrative positions. They do not include the the clerical rank and file positions, which have also grown over the last two decades.

Meanwhile, the trend appears to be moving in the opposite direction at the California State University System. According to the same statistics, there were 1,939 full-time administrators at the 20 CSU schools in 1993. Twenty years later, that number had fallen to 1,301. (Note: Those numbers exclude stats from the Maritime Academy, CSU Monterey Bay and CSU Channel Islands, which opened in during that 20-year span.)

In short, UC administration is up by more than 300% while full-time administrative positions at CSU are down about 33 percent over the same period.

From an administration standpoint, CSU has been able to serve more students with fewer administrators, while the University of California is increasing its management rolls at a rate several times that of its student population.

This is not to say that UC administration growth is to blame for the entirety of the increases in student fees. But it does underscore one of the trends – along with increasing enrollment and declining per capita state investment – that has increased the cost of a UC education for California students.

On Tuesday, the Assembly Budget Subcommittee on Education will meet to discuss the UC Budget. Chairman Kevin McCarty (D-Sacramento) said the administration issue would be on the agenda.

“Lots of questions exist on why we’re short changing higher education funding in California,” McCarty said. “But these answers we know: since 1993 student fees have soared as have high-salaried University of California administrative positions.” 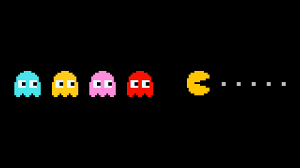 Seen through a certain lens, California is little more than a collection of calamities and recoveries. The hills here burn...
COPYRIGHT 2015 GRIZZLY BEAR PROJECT
Back to top